Since my last post, the Ravens won the Super Bowl!  And my husband and I are such die hard fans that we will remind each other of this simple fact for weeks, months and even years to come.  I really only mention it here because I came up with such a clever title.

In my last post, I told you all about Zena a.k.a. "Beansie", one of my cats, who had recently been diagnosed with diabetes. I have wonderful news to share - after just over two weeks on insulin injections, the vet declared the diabetes to be in remission and I was able to quit giving her shots. Praise the Lord! It wasn't as simple as just giving her shots and then - bam! - no more diabetes, she went back for all-day observation and blood tests twice. After the first blood glucose curve, the vet increased the insulin. Well, on the third day of the increased insulin, my husband called me worried sick (yes, crying) that she was dying. I freaked out and raced home. On the drive, I called my sister ("Why are you calling me?! Call the vet! Now!") and the vet. Low blood sugar. Get her some Karo syrup, and then feed her. Well, that did the trick, and then the vet reduced the insulin. It would have been nice if someone had warned me that could happen... After the second blood glucose curve, we were told that Beansie's numbers were good all day and we could quit the injections. The upshot of all of this is that she is at a healthier weight than she used to be and she is more affectionate than ever. To quote my four-year-old, "I love Beanser; she's my number one love cat." 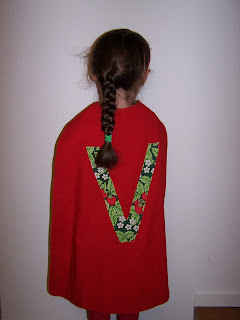 That same four-year-old was recently invited to a birthday party for twin boys in her pre-school class. I always cringe a little when the invitations come home from school with the words, "Come dressed up." And no, they don't mean to wear your Sunday finery. Don't get me wrong, I am not daunted by the thought of making a costume, but the invitation said this party had an Avengers theme. I am pretty out of touch with pop culture, so I had a vague idea of the Avengers being super heroes, but did not know any details. Well, my daughter told me she wanted to be Firestar. I am 99% certain she has never seen said Firestar, but had learned of her from classmates. A quick Google search revealed some VERY adult images of Firestar and I feigned ignorance declaring, "I don't know how to make a Firestar costume. Let's invent our own super hero. How about Vegetarian Girl? She protects animals and makes them well if they're hurt or sick?" It didn't go over very well initially. But the day before the party, I told her again that I couldn't make a Firestar costume and she'd have to go without a costume. She reluctantly asked, "Well, what about that other one you said? Vegetarian Girl?" So I found this fabulous super hero cape tutorial.  I couldn't resist making a matching skirt. 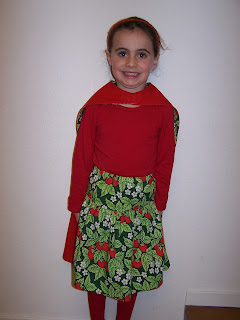 Posted by The REAL EverSewSweet at 8:19 PM